Was you Ancestor a Fife Convict?

Nine hundred records and more than a thousand historic images of criminals convicted in Fife in the early part of the 20th century have been published online for the first time. The Fife, Scotland, Criminal Registers, 1910-1931 collection, has been digitised by Ancestry, the leader in family history and consumer genomics, from original records held by ON at Fife Archives.

This fascinating glimpse into the past gives details of convicts, their crimes and physical descriptions used to identify serial offenders.
And the photographs, some more than 100 years old, reveal the faces of men, women and children arrested in the region.

Valuation rolls for 1935 have now been added to ScotlandsPeople. This set of records follows ten previous releases of rolls, 1855 – 1930, on ScotlandsPeople, the family history website of National Records of Scotland.

The latest valuation rolls include more than 2.7 million indexed names and addresses for owners, tenants and occupiers of properties throughout Scotland, including a record of its annual valued rent. The total of index entries available to researchers on the ScotlandsPeople site is now over 118 million.

Tim Ellis, Registrar General and Keeper of the Records of Scotland, said:
“We’re delighted to be adding to the huge resources of ScotlandsPeople. The latest year opens a window into Scotland in 1935, giving an intriguing glimpse into life at the time. It is part of our commitment at National Records of Scotland to continue improving public access to the records researchers want.”

Among the newly-released records are entries relating to some of Scotland’s well- known authors, including Compton Mackenzie, Neil Gunn, Jospehine Tey, Nan Shepherd and Annie S. Swan. To discover more read our special feature on Scottish authors in the 1935 valuation rolls.

I had the pleasure of going over the New Queensferry Crossing this week. Despite the speed restrictions still in place, it was an amazing journey going over this bridge looking over the left and viewing the Forth Road Bridge and Rail Bridge. Who could fail to be impressed! If you were caught up in traffic spare a thought for those of us that used to have to go by ferry from just below the Rail bridge! 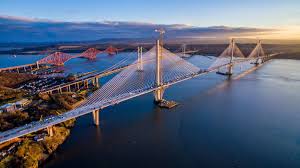